Too many unsung heroes in Malaysia 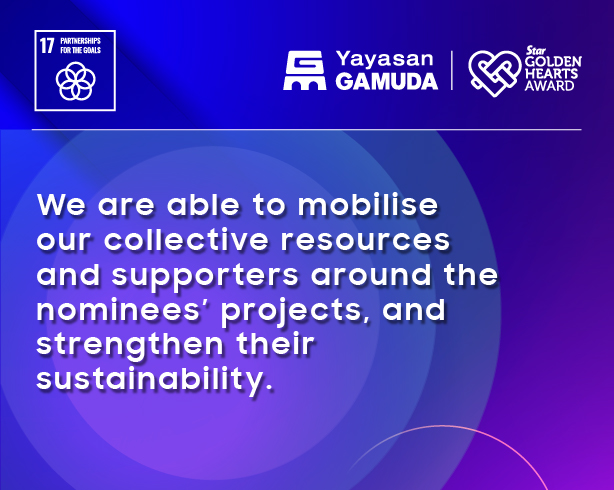 PETALING JAYA: The surge in the number, creativity and quality of nominees, even amid the unprecedented Covid-19 pandemic, has resulted in judges having a hard time settling on winners for the sixth Star Golden Hearts Award (SGHA).

He described the judging process as “indeed tough” as the quality of this year’s nominations, which totalled up to 515 entries, exceeded even that of 2019, which also had impressive nominees. “The 10 winners that we picked are all very deserving. They contributed in their own way and came forward with their own initiatives, with some of the winners being those who also provided assistance to those affected by Covid-19.

“I would like to see this noble initiative by the The Star and Yayasan Gamuda carry on because this is something very meaningful to unsung heroes. “Through the award, we have been able to give a lot of exposure. The primary purpose of SGHA is to recognise unsung heroes and without it, many of them would have gone unnoticed and their contributions unheard of, ” said Lee, who is also Malaysia Unity Foundation trustee.

To those who did not make it into the list of winners this year, Lee hoped they would not be deterred and would continue their incredible work in helping others. “The fact that they have been nominated by so many Malaysians out there clearly shows that they are being seen for the good work that they do,” he said.

Yayasan Gamuda head Ts. Sharifah Alauyah Wan Othman said due to the pandemic, there had been short and long-term impacts on the economy and society, thus calling for strong responses based on solidarity, cooperation and responsibility.

She said several of the nominees were implementing innovative place-based solutions to address societal needs and even complement government action. “They bring to the table decades of experience and underlying principles to promote inclusivity.

“Both Yayasan Gamuda and The Star as programme partners are able to mobilise our collective resources and supporters around the nominees’ projects, and strengthen their sustainability. “They can thus further experiment with new and cooperative ways of working to develop solutions and building on collective goals of different stakeholders,” she said.

Star Media Group chief content officer Esther Ng saw being a judge as an important role to play not only as a Malaysian, but also as a journalist. “As a journalist, we look at things from all sides and I’m continuously impressed with our list of nominees.

“I see being a judge as my way of giving back. I’m so small next to them but what I can do for Malaysia is this – to choose the best and honour them through these awards,” said Ng. She said what impressed her the most was seeing how much more creative the nominees were getting with the way they channelled help towards others.

“This is a very special group of people doing good things for others. I’m very pleased that some of the nominees are so creative and have taken steps beyond the ordinary,” she said.

However, she was pleased to be proven wrong as seen in the numerous quality submissions that had come in, including those centred around environmental protection and unity in Malaysia’s multiracial and multireligious society. “I’m very impressed with the submissions. There’s a lot of creativity and impactful programmes being done by Malaysia’s unsung heroes,” she said.

Social advocate Syed Azmi Alhabshi was particularly touched by the power of the “NGIs” or non-governmental “individuals”. “There are so many names that I wanted to memorise and I would like to shake their hands to thank them for what they’re doing.

“From the overall number of nominations we received, a big chunk of nominees being nominated are individuals. “As an NGI myself, I find it a big boost because it shows that individuals can also make a difference in the country,” he said.

Child protection consultant and former Social Welfare Department assistant director Vijaya Kumari Pillai also had a hard time deciding on the winners, saying that the nominees were all doing fantastic work. However, those who stood out to her were those working to serve the environment and animals.

Universiti Malaya medicine dean and International AIDS Society president-elect Prof Datuk Dr Adeeba Kamarulzaman said although she had been an SGHA judge for a number of years, this year’s line-up was the best she had ever seen.

“It was very difficult to choose amongst so many wonderful individuals and great programmes,” said Prof Adeeba, who is also Malaysian AIDS Foundation chairman.

SGHA is an annual award by The Star and Yayasan Gamuda that celebrates everyday Malaysians who demonstrate extraordinary commitment to social work and promote unity among Malaysians.

This year’s nomination period from May 14 until Sept 2 saw over 500 entries coming from all over Malaysia, exceeding last year’s count of 414. On Thursday, the judges reviewed and selected the final 10 winners of this year’s awards, which will be announced soon. From the pool of 10 winners, one of them will be awarded the coveted Gamuda Inspiration Award.